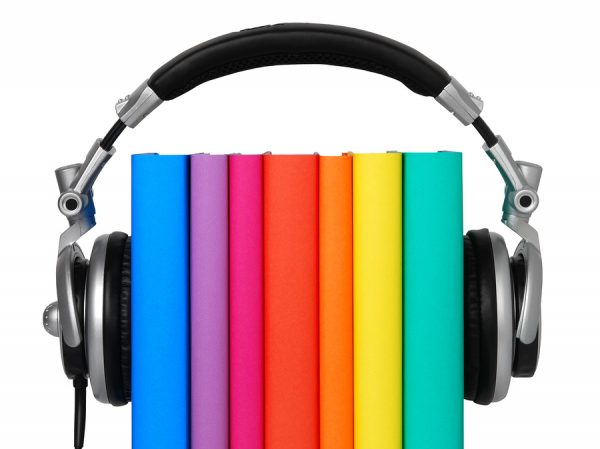 In the great tradition of Top Five Lists on Rhonda Blogs About Books, this Top Five List actually has seven items. (Okay, so I guess it’s not quite a tradition yet, but it will be…)

Time for real talk, guys. Sometimes I’m just not in the mood for a book. Shocking, I know. But every once in awhile (thankfully, not too often), for whatever reason, reading a book just doesn’t do it for me. I might turn to an audiobook when this mood strikes me, but when even that isn’t working for me, but I still want to consume something literary or book-adjacent, I’ll try a bookish podcast. These are a few of my favorites. (Note: Not all of these are exclusively about books, but they all scratch that bookish/literary itch.)

One of several podcasts produced by Book Riot, where I get a lot of my book news, Annotated describes itself as “an audio-documentary series telling stories about books, reading, and language.” It’s sort of got a This American Life vibe, but it’s just about books and book-related topics.

A recent episode that I really enjoyed was “The Very Model of a Modern Major Bookstore,” which covered the opening of the first U.S. location of Canada’s largest bookstore chain Indigo, which seems like more of a fancy gift store that also has a lot of books, which honestly sounds pretty cool. The episode explores the evolution of bookselling as a big business, and what it might look like in the future.

Overdue describes itself as “a podcast about all the books you’ve been meaning to read,” and it is basically a two-guy book club that talks about two-ish (it varies) popular books a week, and we get to listen to their in-depth, insightful, and well-researched discussions. Andrew Cunningham and Craig Getting do not shy away from spoilers; they point out at the beginning of each episode that “these are books you should have read by now.”

The range of genres covered is impressive, from classics like Jane Eyre, The Great Gatsby, and The Count of Monte Cristo; to more recent bestsellers like The Underground Railroad, The Fifth Season, and The Passage; to children’s favorites like Anne of Green Gables, From the Mixed-Up Files of Mrs. Basil E. Frankweiler, and even a few of the Choose Your Own Adventure books.

I’ve listened to several episodes on old favorites that made me want to immediately pick them up for a reread. Of course it’s a delight to listen to a detailed discussion of an excellent book, but it’s also a lot of fun to hear an honest and fair take-down of a bad book; their episodes on Twilight and Ready, Player One are must-listens.

3. What Should I Read Next?

Every week, reader/writer/book expert Anne Bogel interviews a guest, usually a normal, non-famous person, about their reading habits and book tastes, and then recommends them new books to read. I’ve discovered a few of my recent favorites through Bogel’s seemingly magic formula, which seems to be a little like Netflix’s recommendation algorithm, but for books, and I also find her voice very soothing.

Bogel is also an author and blogger; she has written two books, all about books, reading, and living a bookish life, and blogs at Modern Mrs. Darcy (best blog name ever). Fun fact: my brother was the interviewee for Episode 100, back in the fall of 2017.

Listening to an episode of Lore is like wandering through an old, musty bookstore with creaky wood floors on a cold, rainy day in November. You discover an ancient, worn volume of ghost stories on a forgotten back shelf and gingerly finger its spine. You handle the book’s cracked leather cover with care, cautious not to damage the crumbling, yellowed pages as you peruse the archaic language and rudimentary line illustrations, consuming the gothic tales of mystery and horror therein.

You carry the book to the register. The cashier looks it over. “Ah, so you found this one,” he says in his quietly mysterious voice. “You know all these stories are true, right?” You didn’t, but that makes these tales all the more compelling and horrifying.

The cashier places the book in a paper bag and hands it to you over the counter. You exit, ringing the small bell above the front door that creaks on its hinges. The cashier calls after you, “Enjoy!”

He’s Aaron Mahnke, and this is Lore.

Any other Reading Rainbow fans out there? I think a lot people my age and maybe up to like a half generation older can at least partially credit LeVar for our love of books and reading. On this show, he selects a short story every week and reads it out loud for the internet. It’s like a free audiobook being read to you by LeVar Burton. What’s not to love?

6. Stuff You Missed in History Class

I’ve been listening to SYMIHC for like ten years (!) and it’s evolved a bit, and changed hosts a few times, but it’s always remained fascinating and dedicated to exploring those historical topics we don’t usually learn about in school. Which covers a lot of ground.

The show has interviewed authors several times, which is perhaps the strongest argument for including it on a list of bookish podcasts. But I also have always thought of history as inherently literary. Or maybe literature is inherently historical? Or both. Let me explain. We most often experience and discover history through reading, whether original documents and first-hand accounts, or nonfiction history books, articles, and historical fiction. We can also experience history through reading the literature of the past, making works of fiction social history artifacts of their times.

No matter what historical topic you’re interested in, there’s probably a SYMIHC episode about it.  It’s not the only history podcast out there, but it’s my favorite.

This one is probably the biggest stretch, as it’s about a TV show and not even indirectly about books or reading. But Gilmore Girls is a pretty bookish show, so I’ll just go with it.

The podcast started out as two guys reviewing one episode of Gilmore Girls every week. Then they reviewed the miniseries A Year In The Life, and then each episode of Amy Sherman Palladino’s short-lived series Bunheads, and now they’re discussing The Marvelous Mrs. Maisel. When that ends, hopefully ASP will have another show so Kevin and Demi can keep making their podcast.

What about you? What are your favorite podcasts, bookish or otherwise? And what do you usually do when you’re in a reading slump? Let me know in the comments!

One thought on “My Seven Top Five Favorite Bookish Podcasts”