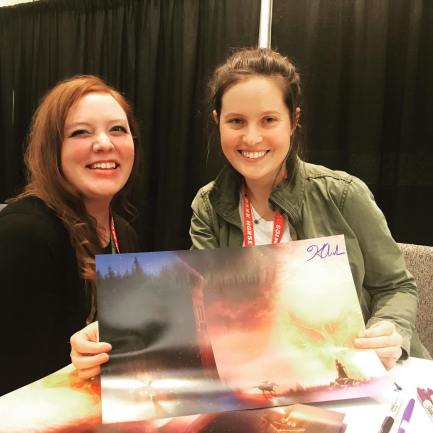 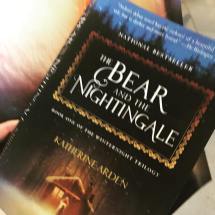 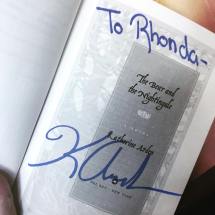 This is a little late, but I met Katherine Arden, author of the incredible Winternight trilogy (I’ve posted briefly about it before, if you’re not familiar, and probably will more in the future…) at her book signing at Emerald City Comic Con last weekend! She was really friendly; she gave me a free poster and said she liked my hair. Look at my doofus selfie-face. I was so excited.

This is only the second time I’ve had an author sign a book, and the first time I’ve had the experience of a big signing event with tons of people. (When I met Rosamund Hodge at Doxacon, Seattle last month, I literally just walked over to her table during a snack break and asked if she would sign it. I handed her a pen from my purse to use.)

Right before the signing, I attended the panel Arden spoke on with four other fantasy authors, “Fantasy in the Mix,” which I think was ostensibly about mixing fantasy with other genres, but ended up being about a little bit of everything to do with fantasy, writing, accessibility, and intersectional feminism. (I don’t know if this was intentional, but all five authors were also women. *pumps fist in the air*)

Another author on the panel was Seanan McGuire, whose work I’m somewhat familiar with, though I’ve only read her novella Every Heart A Doorway, which is being adapted for television. (She was also at the signing, but had a really long line in front of her table and we were running short on time.)

The other authors included Robin Hobb, who’s been around for ages and is pretty well-known in fantasy, though I haven’t read anything of hers, and two other authors I’d not heard of (though both have been writing a long time): Jenna Glass, whose first novel The Women’s War was just released, and Silvia Moreno-Garcia, whose latest novel Gods of Jade and Shadow comes out this summer. All of their work sounds incredible and I’ve placed some holds through the library!

Have you ever been to a book signing, or met a favorite author some other way? What was your experience like? Did meeting them change how you read their work at all?

If you’re a book signing veteran, do you have any tips for making the events a better or more meaningful experience?

Let me know in the comments!

One thought on “Did I Mention I Met Katherine Arden?”