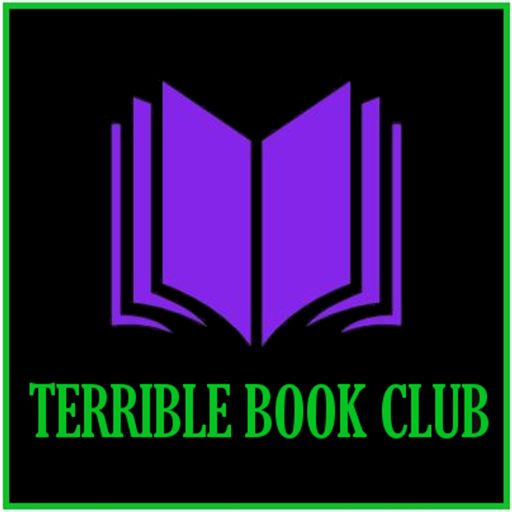 (I previously wrote about my recommendations for bookish podcasts, but I’ve recently joined a literary podcasters network for my own show, Pop DNA. Through this network I’ve discovered some fantastic shows and interacted with their hosts, and have been privileged to interview a few of them. This is the first post of a three-part series showcasing these great podcasts you should immediately add to your play queue!)

This week I had the privilege of interviewing Paris and Chris of the Terrible Book Club Podcast. Here’s what they had to say about their show:

Rhonda: What’s your show called and what’s it all about? Where can we find it and when can we find new episodes?

Terrible Book Club: If you’re reading this interview, you’re likely a book lover. In that case, you’ve probably had the experience of browsing a shelf at a book store or scrolling through Kindle offerings and seeing a title, cover art, or a description that makes you think, “Who the hell would read this!?”

Terrible Book Club is a bi-weekly podcast released on Tuesdays where we read and review those books – the ones that many folks would see and immediately have a strong reaction toward. Most book clubs read books they think will be good, but we choose the ones we think will not be good.

So, I guess we’re an…anti-book club? The book club Antichrists? Maybe it’s not the books that are terrible, but us! You can find the show on our website or anywhere you listen to podcasts.

R: Why did you choose the podcast medium? Do you listen to podcasts?

Chris: Podcasts work best for long-form discussions, which is what I wanted to have when I pitched the idea to Paris. We’re trying to do a fairly in depth look at the books, and it’s easier to get a ~100-200 Mb audio file distributed widely than multi GB video files. I didn’t want to do short reviews, so podcasts were the obvious choice.

Paris: I listen to a lot of podcasts because I work in data and stand at a desk most of the day. I also rely on a mix of podcasts and music to get through workouts and commuting by foot/public transit.

Since no one needs to hear, “Serial, Lore, Reply All…,” another time, I’ll list some other shows I like that are smaller and deserve your attention:

TBC: Biggest surprise: That we were able to create a small, loyal listener base on Patreon to offset the out-of-pocket cost of running the show.

Most difficult thing: Tied! (1) Coming back from our year+ hiatus (2) Realizing that 12 or so of our original episodes were lost during said hiatus. I still think about it and dream that someone downloaded them all and they’ll one day be returned to us, but this is probably not going to happen. This is your cue if you somehow have them!

Most rewarding thing: Interacting with our patrons on the Patreon/other social media platforms and hearing their thoughts on the episodes/bonus content we have.

R: What is your favorite episode you’ve done? And/or which one would you recommend if someone was only going to listen to one episode?

Paris: I still recommend Episode 15 – The Art of the Deal by Donald J. Trump and Tony Schwartz as a good starter episode since (a) it was our first episode after being off the air for over a year and (b) I feel we did a good job balancing decent research and humor without getting too political given the subject matter.

Chris: The Eclipse Of Darkness is just too nutty not to bring up, and is by far and away the episode that contains the most sentences that would make a listener think, “what the hell am I even listening to”, which is a reaction I’m totally fine with.

R: What do you hope listeners get out of your show?

Paris: I hope that the show both (1) makes a listener laugh and (2) either makes a listener think more deeply about the media they consume or makes them consider a viewpoint differently than they would have before.

Chris: If I helped you pass a dreary or stressful work day, gave you a few laughs during a road trip or work out, or made you think about what makes art ‘good’ or ‘bad’, then I feel like I’ve done what I wanted to.

R: What genre(s) do you love to read? If you could recommend one book to newcomers to the genre(s), what would it/they be?

Paris: I think the only genres I avoid are YA and romance, but that might be too shallow of an assessment. Mostly I love fantasy (I’m about to read GRRM’s Blood & Fire) and various types of nonfiction. I’m a sucker for language, science, philosophy, and anything relating to heavy metal history, ethnomusicology, or Norway.

For fantasy, I’d recommend Laurie J. Marks’ Elemental Logic series. There are three books out (Fire Logic, Earth Logic, and Water Logic), with a fourth forthcoming (but the last one came out 12 years ago, so who knows). I’d still recommend reading the existing three. Laurie was a professor of mine in college and I remember really enjoying her work, though it’s been many years since I’ve read them. However, I remember them making enough of an impression on me that it’s probably safe to still recommend them!

For nonfiction, The Unfolding of Language was enjoyable as a good pop science overview of the evolution of human language.

For neither of these genres, I’m just gonna’ tell you that you should read House of Leaves if you haven’t yet because I’ve never had a book make me feel quite like that one did. It’s an experience worth having.

Chris: I read fiction almost exclusively, with the exception of the nonfiction stuff we’ve read for TBC. Most of my reading diet consists of fantasy or science fiction books, with the occasional look at something higher brow here or there. I’m one of those guys that got halfway into Infinite Jest before I felt too overwhelmed, but still feel like I got the point being made. I think every science fiction enthusiast should read The Hitchhiker’s Guide To The Galaxy. It’s the book that made me understand that some things are only possible in certain mediums – lots of the jokes in the book work in text only, which is why the movie version was underwhelming. Plus, it’s got spritzes of easily digestible philosophy sprinkled throughout. Good for the brain, I’d say.

R: What are two to three books you read and loved in the past year?

Paris: We did read a few books for the show that we liked, so I can name one of those and also discuss another non-TBC books I’ve read in the past year that I liked.

We read Zarsthor’s Bane by Andre Norton for the show and we both really loved it. I wish that I had found more of Norton’s work when I was younger. The heroine is strong without being over-stated, she has a cat sidekick, the plot isn’t too obvious, and there’s no romance! I seriously need to read the rest of the series in which this book is based.

Tentacles Longer Than Night by Eugene Thacker is about the philosophy of horror and I found it completely engrossing as those are two of my favorite forms of media. Any Lovecraft or Clark Ashton Smith fans should take note and read this one.

Chris: I’ve been pretty taken with The Expanse series by James S. A. Corey (a pen name for an author duo), a pulpy sci-fi story that clips along at a captivating pace. There’s plenty of stuff I roll my eyes at in the series, but what I find compelling is the focus on the characters processing the increasingly epic-in-scale events emotionally and subconsciously. Plus, the action scenes are tense and engaging most of the time. The main characters definitely have a (non?) terminal case of plot armor, but if you want some rooty-tooty-spacey-shooty adventures, it’s by far my favorite series for that.

R: What’s one book you hated in the past year?

Chris: The Eclipse of Darkness: Unveiling the Unseen World by Robert Arden Szanyi pretty much melted my brain. There’s almost no way your average reader has ever heard of it, but it’s essentially someone’s rant about how the reality we live in is an ever-decaying projection/simulation that is beamed into our minds by demons (who have a nice big boardroom table).

Paris: Of all the books we’ve read in the last year, I think The Angel Wore Fangs (Deadly Angels Series #7) by Sandra Hill is the one that made me the most annoyed. It was a combination of so many things that I dislike – romance, awkward sex scenes, coconut peppermint cakes, historical anachronisms, nonsensical plots, tasteless holocaust jokes, forcing weird cameos into your book, etc. (I could go on). The quantity of bad things really got me with this one.

R: Why do you love books?

Paris: Like Lisa Simpson, books were often my only true friends when I was a child. Joking aside, books were ways that I could visit places beyond my hometown and learn things that no one around me could teach me. They’ve always been both a resource and a refuge.

Chris: The internet didn’t exist for the early portion of my life, and I was always looking for new worlds or ideas to explore. Fantasy and sci-fi books (as well as other media) were a nice escape, or sometimes an eye opening experience. I have a vision disorder, so I always thought my mind’s eye was a bit stronger than my actual eyes, and I loved seeing what kind of mind-movies the next weird fantasy book I picked up could conjure up for me. Sounds weird when I put it that way, but I honestly think books are like thought exercise. Even the trashy airport thriller you bought to kill time on a flight! (Does anyone do that anymore?)

Make sure to check out Terrible Book Club, and keep an eye out for my next podcaster interview!