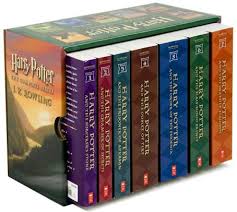 Now, before you leave a long, impassioned comment (which I welcome, by the way) or just skip this post altogether, let me just say upfront that I fully support every reader’s right to read and love what they want to read and love. I recognize that Harry Potter has a very special place in many readers’ hearts, and I AM on board with people connecting on a deep, emotional level to the fiction they read.

I have a lot of pent-up thoughts and feelings regarding one Mr. Potter that I feel I need to express. There wasn’t really any one event that prompted this, except maybe THAT J. K. Rowling tweet from a couple weeks ago, but now is as good a time as any. I guess I want to go into the new year having gotten this off my chest.

Most of my thoughts and personal discourse regarding this topic fall into three main points, having to do with (1) the books themselves; (2) the fandom; and (3) the author. And then, because I am always trying to find the bright side of everything, I will conclude with some of the positive things I see about this series.

But let’s get right into this with my first and most important point, which is that…

1. The books are objectively not good. 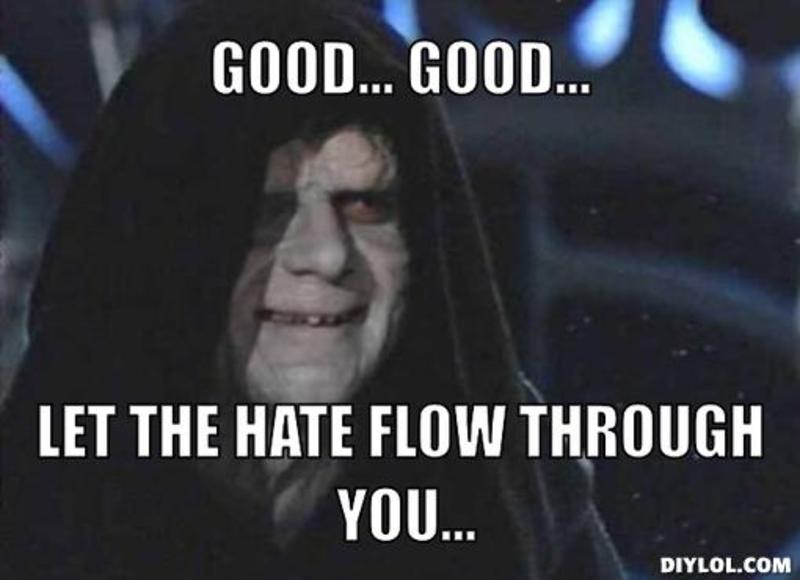 Whenever I’ve brought up my dislike (well, really more apathy than active dislike) of Harry Potter, fans are quick to assure me that the books are well-written. But here’s the thing: they’re really not.

I was the exact target age for the first book when it came out (10 or 11), but I was not really interested. Other books held my attention at the time, like The Baby-Sitters’ Club, The Chronicles of Narnia, Anne of Green Gables, Ella Enchanted, and any Star Wars book I could find that wasn’t TOO far above my reading level (though I did read Heir to the Empire when I was nine [shrug emoji]).

Actually, I think my experience is indirectly related to why Harry Potter became such a big deal, at least in part: for many people of my generation, the first Harry Potter book was the first book that they read on their own and loved; it was the book that taught them to love reading, so they’ve put it on a pedestal. We all do that with the books that were formative to our identities as readers, and people for whom that book was Harry Potter happen to have that in common with millions of others.

…it was the book that taught them to love reading, so they’ve put it on a pedestal.

So I understand the nostalgia and the loyalty of Harry Potter fans. But the quality of the books themselves is not really defensible. I may have missed the books the first time around, but I read the first two when I was 20 or 21, a decade after they were first released, just to see what the hype was about, and I was not impressed. Yes, I was an adult reading children’s books, as you may want to point out, but I’ve read a lot of other children’s books for the first time as an adult that were better.

There are two main issues I have with the writing in the Harry Potter books: the pacing and the prose. In the first book, especially, so many pages are devoted to what is essentially exposition and background before Harry even arrives at Hogwarts. I know setup is essential to worldbuilding–I am an avid fantasy fan, so I am very familiar with worldbuilding–but this should not be done at the expense of plot and character development.

And in response to anyone who claims the prose is well-written, I have to wonder: have you read any other books? The writing style is overly simplistic and often repetitive. Descriptions drag and the dialogue is at best conventional, and at its worst clunky and plodding. They’re just not good, you guys. There are so many better books you could be reading.

You can disagree with me if you want. That’s what opinions are. But if you want to argue about this, I’d advise you to read my next point, because…

2. The fandom is obnoxious.

Please note that I did not say the individual FANS are obnoxious. I have nothing against a fan of a book series expressing their admiration and love in any way they choose. You want to decorate your house in Hufflepuff colors and tattoo the Marauders’ Map on your arm (I don’t entirely remember what the Marauders’ Map is, so I don’t know how practical that would be) and name your dog Hagrid? Great! You do you!

But liking Harry Potter is not a personality trait.

Your Hogwarts House isn’t some key component of your identity, your favorite character isn’t some window into your psyche, and no relationship in the story should be #GOALS. Fans of this franchise collectively (again, I’m not calling out individuals here, but the collective fan base) seem to forget these things.

There are, of course, other franchises with similarly obnoxious fandoms. During the final season of Game of Thrones, for instance, you basically could not say anything positive about Season Eight on Reddit without getting chewed out by r/freefolk. And Star Wars has a long, fraught history of dudebros gatekeeping the fandom, made only more evident by the stark divide between those who loved 2017’s The Last Jedi and those who are wrong (fight me). So Harry Potter is not alone in this.

But one key difference I notice between this fandom and others is a certain attitude or assumption that seems to be present in most Harry Potter fandom expressions, but that is not often present in other fandoms’ discourse. This attitude or view is kind of hard to pinpoint and articulate, but I’m going to try.

So, if you’re a fan of some other fantasy or science fiction property, like Star Wars, Star Trek, Game of Thrones, Lord of the Rings, or anything Marvel–and maybe these aren’t great examples, because all of these are more or less mainstream now (Marvel and Star Wars are for sure), but they weren’t always–at one point, at least, you had an interest in a story that was considered niche, or even nerdy. In the mid ’90s, if you were an eight-year-old Star Wars fan trying not to get caught reading a Young Jedi Knights book under your desk at school (this may or may not be based on a real experience), you understood that most people might not quite understand your love for your favorite movie series.

But if you were in school just a few years later, when Harry Potter and the Sorcerer’s (or Philosopher’s) Stone first came out, you likely were not only understood by all your peers who were all reading the same book, but even encouraged to read it by adults in your life, from parents to teachers to school librarians. Harry Potter was normalized from its debut; it was mainstream from the outset. And because of this, Harry Potter fans have (most likely) never felt that their fandom was something niche that made them nerdy; it’s always been accepted within mainstream culture.

As a result, while most other “geeky” fandoms, despite their other issues, seem to at least have a general understanding that not everyone in the mainstream culture will share their love of their respective franchises, most of the Harry Potter fandom seems to lack this awareness. There is an assumption that everyone loves it, and if someone expresses dislike, the fandom will gang up on that person to hit them over the head with how wrong they are very swiftly (believe me, it’s happened to me).

There is an assumption that everyone loves it, and if someone expresses dislike, the fandom will gang up on that person…

There’s little chance of this assumption being debunked any time soon, as the entertainment industry has enabled this attitude to a large degree. Hollywood and the greater industry know that these fans will spend money on anything and everything Potter-related, from the film adaptations, to trips to the theme park, to spin-off movies that apparently even some fans didn’t really want, to any piece of merchandise you can imagine, regardless of quality.

It’s mostly this attitude from the fandom that has discouraged me from attempting to read the series beyond the two books I’ve read, though it’s not the only reason. Which brings me to…

3. The author… well, you probably know.

That aforementioned tweet is just the latest example of a pattern in Rowling’s behavior and online discourse that has turned me off to Harry Potter, and any other work she might produce.

Besides making comments that can be construed as transphobic, homophobic, and racist, Rowling’s habit of adding tiny bits of information to the canon via tweet or interview comment plays into one of my biggest reading pet peeves. When an author tries to control readers’ perceptions of their work YEARS after the fact, that is just obnoxious. If any of these pieces of information were so important to the series, they should have been in the books.

A lot of this information seems to be doled out just as a way to stay relevant, like the fact that Dumbledore is gay, even though this particular fact seems to have no relevance in any of the subsequent media. I think that’s called queerbaiting, and it’s kind of not cool. I don’t know if this is Rowling’s true motivation in “revealing” Wizarding World information in this way, or if she is just earnestly sharing fun facts about the world she created out of genuine love. But either way, the effect is the same.

Look, this whole subject is kind of bumming me out, so let’s move on to…

Like I said in the beginning, I’m not saying that you’re wrong if you like Harry Potter (you ARE wrong if you don’t like The Last Jedi, though, just making that clear).

The fantasy world you enter when reading the series is obviously very compelling to a lot of people. I am 100% on board with getting lost in a book and celebrating your love for it with other fans. The community aspect is what makes fandom fun, and I know of a lot of people who have found that community through Harry Potter, which is wonderful! I also know of a lot of people who discovered a love of reading because of Harry Potter, and have since gone on to find other, better books, which is also wonderful.

In the end, books are about readers. Like the second and third laws of library science state, “Every person his or her book,” and “Every book its reader.” Love what you love, and let others do the same.

Anyway, I hope you’re not too mad at me now!

Are you a Harry Potter fan? Or not so on board, like me?

Also, would you be interested in a follow-up post about my recommendations for books to read instead of Harry Potter? Let me know in the comments!

As always, thanks for stopping by, and happy reading!

15 thoughts on “I Am Not On Board with “Harry Potter””