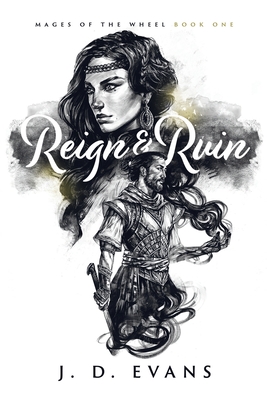 One interesting side effect of my brief brush with authors behaving badly last month was that my inbox was proverbially flooded with review requests.  Who would have thought that broadcasting the fact that I had rated a book as one star (which was beside the point, but still a reality) would make so many authors want me to review their books? I’d think the opposite, but okay.

The book that stood out the most to me from among this bunch, just based on the description, was J. D. Evans’ Reign & Ruin (click the cover to buy through IndieBound), which sounded like just the sort of mysterious and atmospheric kind of romantic fantasy novel that I have been known to absolutely devour.

She is heir to a Sultanate that once ruled the world. He is an unwanted prince with the power to destroy.

She is order and intellect, a woman fit to rule in a man’s place. He is chaos and violence and will stop at nothing to protect his people.

His magic answers hers with shadow for light. They need each other, but the cost of balance may be too high a price. Magic is dying and the only way to save it is to enlist mages who wield the forbidden power of death, mages cast out centuries ago in a brutal and bloody war.

Now, a new war is coming. Science and machines to replace magic and old religion.

They must find a way to save their people from annihilation and balance the sacred Wheel—but first, they will have to balance their own forbidden passion. His peace for her tempest, his restlessness for her calm…

In my experience, it can be tricky to find romantic fantasy books that give enough attention to the fantasy elements that I love, as well as to the romance plot. I find that far too often the romance overpowers the genre elements, until the fantasy aspects become a mere backdrop, or the romance is barely there.

I am happy to say that Reign & Ruin does neither; it strikes the perfect balance between those fantasy elements I love–the world-building and magic systems, the mythos and weight of the hero’s quest, and rich character development–and the love story. It is truly both a fantasy novel and a romance.

And the romance is so well-done, too! Both characters feel real and genuine, and their relationship develops believably. There are real stakes involved in their interactions, and the romance feels intrinsic to the plot and setting.

The political elements of the story remind me of some of my favorite court fantasy, like The Queen of the Tearling and the very best parts of the Throne of Glass series, while the Middle East-inspired setting appealed to what I love about The City of Brass and The Wrath and the Dawn.

Fans of any of these books will no doubt devour Reign & Ruin, as I did.