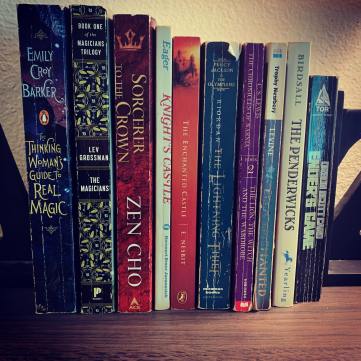 So awhile back I wrote this post about how I am not a fan of Harry Potter. The response was a little surprising to me, to be honest. A lot of commenters agreed with me, and even a couple of people who are fans of the series at least acknowledged my points. No one left angry comments or sent me death threats, so I’d call that a positive.

I also mentioned in the post that I was thinking of following up with recommendations for alternatives to Harry Potter, and a couple of people expressed interest in that. So, here we are.

I’ve made this list overwhelmingly middle grade, since Harry Potter is technically middle grade, or at least the first two or three books are. I’ve divided it into classics (the newest of which was published in 1962), new classics (1980s/1990s), and modern (all published within the past five years). Then at the end I’ve included some books for adults that I think will give you the same kind of vibe or mood as Harry Potter, but with more mature content and prose.

The works of E. Nesbit

I wouldn’t say that Nesbit invented the children’s fantasy genre, because we do have Lewis Carrol and L. Frank Baum, but her books are the most recognizable predecessors to a lot of the tropes and tenets we see in modern children’s fantasy novels.

A group of three to five children are looking for amusement in their boring, ordinary world, then discover a magical element which brings them all kinds of adventures, and they learn a lesson before returning to their everyday lives a bit wiser. It’s almost a cliched formula now, but I tell ya, it WORKS! And Nesbit mastered it in the early 20th century.

A few of my favorite Nesbit works:

The Chronicles of Narnia by C. S. Lewis

Look, I feel like I don’t need to tell you about Narnia because you already know. If you haven’t read them yet, like, just do it. Honestly, they are like gateway fantasy, no pun intended. This to me is the gold standard of children’s fantasy.

Seriously, why is there no Narnia-Land at a major theme park? Does Disney still own film rights to Narnia? Could they buy the theme park rights, too? Do we really need a Marvel Land at Disneyland? Couldn’t it be Narnia instead? And the gateway would look like a gigantic wardrobe that you walk through, and there would be lampposts everywhere, and maybe fake snow (?) and there would be a sleigh ride and you could go on board the Dawn Treader and there would be a store where you could get Turkish Delight. Ugh, why doesn’t this already exist?

Tales of Magic by Edward Eager

Eager takes a page right out of Nesbit’s book in the formula for his stories, and he acknowledges such in all his books. What Nesbit did in early-20th-century England, Eager translates to mid-20th-century middle America, and it still works!

There are seven books in the Tales of Magic collection that are all at least loosely connected to one another:

The Song of the Lioness series by Tamora Pierce

Tamora Pierce is one of the most prolific and celebrated fantasy authors of the past 30 years. My favorite of her series is this story of a girl named Alanna who wants to be a knight in a world where girls can’t be knights, so she disguises herself as a boy. This series veers into YA in its later books, but the first is firmly middle grade, and delightful.

I feel so strongly about this book that my Facebook bio is “Ella Enchanted was my Harry Potter.” Ostensibly a retelling of “Cinderella,” Ella Enchanted takes us into a rich fantasy world that is also simple and digestible for even the youngest readers. It’s not too heavy on the info-dump world building; we simply enter the world and see it through Ella’s eyes.

This is also a transformative work: it recontextualizes the classic Cinderella tale into a story with a strong heroine and a positive message about self-confidence and friendship. I feel so lucky to have gotten to read this as a child. I reread it from time to time now as an adult, and it still holds up.

Chance the Rapper may consider this series to be second-best to Harry Potter, but I think it is far better-written and more deserving of the status usually afforded to HP, though the comparison between the two series is apt on a surface level. Percy Jackson, like Harry, discovers that he has a magical heritage and leaves his ordinary life to attend a school with other children who share that heritage. But rather than mere wizards, Percy and his classmates are the children of Greek gods. I’d recommend not bothering with the movies, though.

Here’s what I’m talking about with that Chance the Rapper thing:

I think Arden’s Winternight trilogy are some of the best fantasy novels of the past five years, and her middle grade books are just as enchanting. The first book follows 11-year-old Ollie on a spooky adventure involving a school field trip gone wrong, new friends, and maybe ghosts. The books are a little dark and slightly creepy for younger readers, but kids who are about nine and up should be fine.

The House with Chicken Legs by Sophie Anderson

This book draws inspiration from the Russian folklore figure Baba Yaga, the witch whose house runs around on chicken legs, and follows Baba’s 12-year-old granddaughter Marinka on a whimsical, funny adventure all over the world.

This long-running middle grade fantasy series is still going strong after more than 25 years. There are currently 33 books in the main series, with another planned for later this year, plus a spin-off series.

Brother and sister Jack and Annie find themselves on magical adventures through time and space, meeting dinosaurs and pirates, and spending time in Ancient Egypt, the Wild West, and King Arthur’s Court, and more, with the aid of their magic tree house.

The Magicians trilogy by Lev Grossman

I think The Magicians was actually intentionally written to be “Harry Potter for adults.” The first half follows a group of students at a college for magicians, diving fairly deep into the rules and physics of the magic systems and dropping hints about magical worlds that exist beyond our own. The main character, Quentin, is obsessed with a children’s fantasy series called Fillory and Further, which is a pretty blatant analog for the Narnia books.

In the second half of the first book, Quentin and his fellow magic college graduates actually find their way into Fillory because it turns out it’s a real place, but it’s not at all the way they expected after reading about it in cheerful children’s books. (I don’t think that’s a spoiler…) Books two and three further explore the characters’ relationships with each other, with Fillory, and with magic. If you like the SyFy series, you should definitely read the books!

A blurb on the cover of my copy of The Thinking Woman’s Guide to Real Magic actually compares the main character Nora to Hermione from the Harry Potter series, and that really annoys me, but this book is really good. It’s similar to the Magicians series in that it’s an adult portal fantasy that shows a gritter, more “realistic” vision of the magical world that the protagonists find themselves in.

But Thinking Woman’s Guide is in a way a quieter and more mundane (in a good way) look at its magical world. Nora spends most of the book adjusting to and finding her place in this world that takes a very medieval view toward women. She learns to do magic the hard way, and we spend a lot of time with this magic system. There is a sequel coming and I can’t wait!

The All Souls Trilogy by Deborah Harkness

The British network ITV is currently adapting these books into a series, A Discovery of Witches, which is also the title of the first book in the trilogy. The first season aired last year and the second is coming soon.

This is yet another book that has been described as some variation of “Harry Potter for adults,” which, again, super annoying. I explored this series a little bit in another post about a year ago, which you can read here.

I mentioned this series in my original post, but I hesitate to recommend it because the books are out of print and kind of difficult to track down. This is the Star Wars EU, what’s now called “Legends” and is no longer canon under Disney’s direction. The series centered on Han and Leia’s kids and their friends (one of whom is Chewbacca’s nephew!) having adventures while attending Luke’s Jedi Academy. In one book he drops them off on a volcano and one of them loses an arm in a lightsaber practice fight. Hard core.

And just for the heck of it, here are a bunch more of my favorite fantasy books!