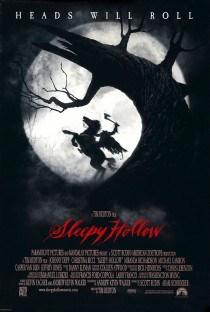 If you know me well, you know that Autumn is my favorite time of year. Come mid September, I am trash for all things pumpkin spice, my boot collection makes its way out of my closet, and I find myself wanting to get cozy at home with a cup of cocoa and a spooky read, or, occasionally, a spooky adaptation.

Here are a few movies and series I recommend watching while snuggled under a blanket during a thunderstorm, preferably while a pie bakes in the oven (the flavor of pie is up to you):

We Have Always Lived in the Castle

Based on the Shirley Jackson novel of the same name, this 2018 film strikes a perfect balance of creepiness and mystery. You know from the beginning that all is not right with the Blackwood sisters, but you don’t know until the end (unless you’ve read the book) the full extent of the secrets they’re keeping in their isolated, crumbling mansion. Extra points for beautiful 1960s costuming.

Where to watch: Netflix

I don’t know if this was what Washington Irving had in mind when he wrote his short story “The Legend of Sleepy Hollow,” but this 1999 Tim Burton flick is a lot of pure, campy fun. Cristina Ricci’s black-and-white striped dress is a highlight, even if it’s not historically accurate.

Where to Watch: Amazon

Reviews were mixed for this 1998 adaptation of Alice Hoffman’s novel about two sisters raised in a family of witches, where the women have secrets and a curse. The film has achieved cult classic status at this point, though, and of course Nicole Kidman and Sandra Bullock are always perfect.

Fun fact: this movie was shot in Coupeville, a town in the San Juan Islands in my home state of Washington. Last Fall, the town celebrated the 20th anniversary of the film.

Where to Watch: Amazon

The Girl With All the Gifts

M. R. Carey’s unique take on the zombie novel was translated pretty flawlessly to this 2017 film. Our protagonist and guide through the world of the story is Melanie, a 10-year-old girl who is not everything she seems at first–she is much more. Seriously, this is just so, so good.

So this isn’t “spooky” per say, but Jane Austen’s parody of the Gothic Novel, and all the spooky tropes that go along with it, has long been my favorite book. This 2007 BBC made-for-TV movie is the best adaptation I’ve seen (though the kids’ series Wishbone did a pretty decent job of it).

Where to watch: Amazon

A Discovery of Witches

I’ve written about this series before, but if you don’t feel like clicking the link, this series pretty faithfully adapts the first book of Deborah Harkness’ All Souls Trilogy, also titled A Discovery of Witches. It’s the story of a witch who has been suppressing her magic for decades in order to pursue her career as a historian, but one fateful discovery (of witches, hey-o!) sets her down a path toward growing into her full power in order to save the world.

Where to Watch: AMC (if you have a TV provider sign-in) or Sundance Now (7-day free trial available)

The Haunting of Hill House

I actually have not watched this series yet, but I’ve heard good things and it’s one I’ll be watching this Fall. The first season, which is based on another Shirley Jackson novel of the same name, premiered on Netflix last year and follows a family as they relive memories of the frightening occurrences in their childhood home. I’m nervous…

Where to Watch: Netflix

I finally finished Part Two last week, as Pop DNA will be discussing this show in October. It’s based on Roberto Aguirre-Sacasa and Robert Hack’s darker take on the classic Sabrina the Teenage Witch comics series, and follows Sabrina Spellman through her first year at The Academy of the Unseen Arts, a school for young witches.

Where to Watch: Netflix

Given the success of The Lizzie Bennet Diaries, it’s no surprise that the period between 2012 and 2016 saw dozens of literary webseries adaptations. One of the more unique of these was 2014’s Frankenstein, M.D. by PBS Studios (that’s right, PBS got in on the action). Victor Frankenstein is now Victoria Frankenstein, a med student researching “electrophysiology,” or the effects of electricity on the human brain and heart, along with her faithful assistant Iggy.